Scan your closets and drawers. Chances are, you’ll find T-shirts, tote bags and baseball caps emblazoned with logos and slogans of conferences you attended, products you bought, nonprofits you supported, companies that wanted to sell you stuff.

A majority of Americans own branded pens, drinkware, T-shirts, bags, caps, outerwear and desk accessories — with the average household having 30 promotional products, according to the Advertising Specialty Institute, a trade group.

Swag or schwag — branded promotional merchandise — is a major marketing tool in almost every industry. But it feels particularly pervasive in the technology sector, which shelled out $1.43 billion for promotional products in 2018, up from $1.08 billion the year before, the trade group said.

For tech companies, which often deal with complex products, producing something tangible such as a water bottle or fleece vest helps make abstractions more appetizing to consumers. 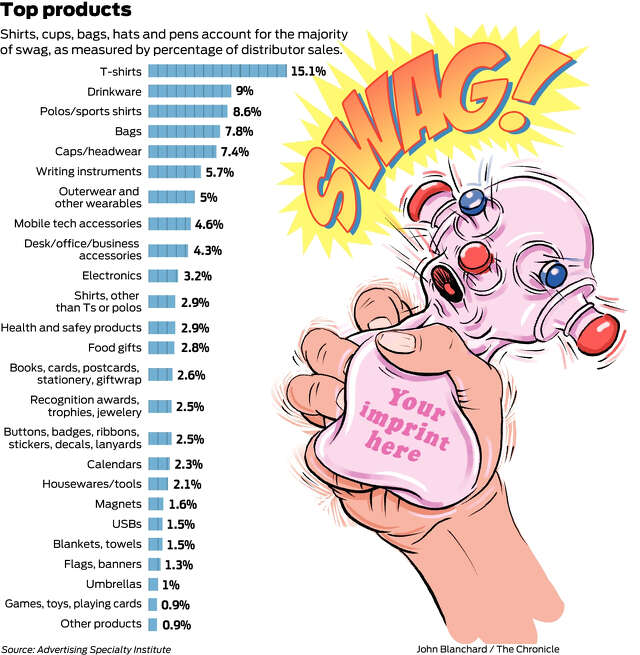 “Most of Silicon Valley is intangible clouds of electrons tunneling down circuits,” said Paul Saffo, a futurist and longtime valley watcher. “That’s why we’re suckers for physical artifacts.”

There are other reasons, as well. Silicon Valley spawns scores of startups, which need to quickly establish themselves in the public eye. Companies hand out logoed apparel to create walking billboards for themselves as they jostle for new recruits and customers. As tech enterprises release new projects, T-shirts are de rigueur for fostering esprit de corps among team members. There’s even a book, “Apple T-Shirts,” that chronicles some of the company’s history through its apparel.

“Swag has existed for as long as the Valley itself,” said Leslie Berlin, project historian for the Silicon Valley Archives at Stanford, in an email. “I still treasure my Fairchild Semiconductor pencil holder.”

In an industry where companies and products come and go seemingly in the blink of an eye, swag can outlast them.

“We find that T-shirts are sometimes the only physical evidence” of a defunct product, alliance or company, said Dag Spicer, senior curator at Mountain View’s Computer History Museum. “We have quite a few shirts of glorious failures.”

The museum counts about 6,500 items of ephemera — T-shirts, mugs, buttons, hats, tote bags — in its collection. One exhibit wall showcases hundreds of button pins with slogans like “I pray in Fortran” — an early programming language — “Support your local computer dealer,” “The Joy of Unix,” and “NetWare, Dedicated to Serve All LANkind” — an artifact from the days when Novell dominated local area networking.

“I’ve always wanted to do a USB exhibit about all the crazy little devices and funny little shapes they make USB sticks into,” Spicer said.

But environmentalists worry that the deluge of knickknacks adds to landfill — and say their concerns are heightened as swag goes more high tech.

“Swag was always wasteful but now has become things with circuit boards, batteries and other toxic materials,” said Nick Lapis, director of advocacy at Californians Against Waste, an advocacy group. “It’s irresponsible to hand out a disposable item with lithium ion batteries.”

Patagonia, the Ventura maker of outerwear that’s a coveted swag item, in April said it would decline to stitch corporate logos on its vests and jackets except for companies that “prioritize the planet.”

Tim Andrews, CEO of the Advertising Specialty Institute, says the industry is making a conscious effort to be more environmentally aware. Part of that involves higher-end merchandise and more personalized items — “you rarely discard something with your name on it,” he said.

“The time of cheap plastic items that people tossed away quickly was 15 or 20 years ago,” he said. “If you distribute a product that’s not kept, respected and appreciated, that’s not effective. We encourage members to focus on products that will be retained.” 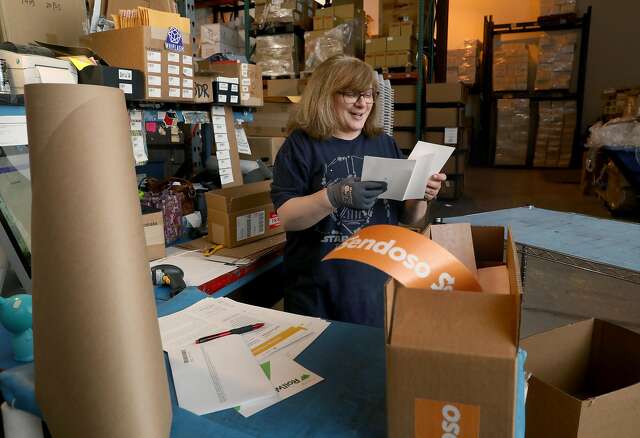 Sendoso is one of many companies that have made a business out of facilitating swag.  Photo: Liz Hafalia / The Chronicle

The group’s studies show that consumers have more favorable impressions of freebies that appear sustainable and were made in the U.S.

Some new green forms of swag have emerged. Danielle Baskin of San Francisco started Branded Fruit initially as a joke but now has a thriving business of printing company names and logos on all types of produce, from avocados to peaches to sweet potatoes. Growing up with a mom who worked for a promotional catalog — her toys were branded stuffed animals, stress balls and maze pens — she already felt connected to the industry.

Fruits and veggies are “something everybody wants, and they don’t sit on a shelf forever and don’t go to landfill,” she said. “People now are more interested in experiences than objects; eating an avocado is an experience, and it can be a branded experience.” Also, branded produce is very Instagram-friendly, extending its reach on social media.

The logos, meant for produce with peels or skins, use the same nonedible, non-compostable material as supermarket produce stickers, but Baskin said she plans to switch in September to new inks that will be edible and compostable.

Other companies are harnessing technology to make swag more personalized and effective.

Kris Rudeegraap co-founded Sendoso, a San Francisco company that automates assembling and sending customized swag packages on behalf of customers, including personalized gifts, such as mugs from the recipient’s alma mater, bobbleheads of the recipient, handwritten notes and a variety of other items.

Now 3 years old, Sendoso has 150 employees and more than $13 million in venture backing, and it will send out about half a million packages this year for its 400 corporate clients. It integrates with customer relationship software like Salesforce. Rudeegraap said sending swag and letters delivers a 30 times higher response rate than simply emailing.

“We don’t want to send a cheapie pen that will get tossed; we’re looking to make a memorable impression,” she said. “In an age of too many voicemails and overloaded email boxes, people still get excited to receive a package. It costs more, but there’s a big return on investment.”

One reason swag is so effective is that humans, like other primates, are hard-wired for mutual exchanges, said Jamie O’Boyle, senior analyst at the Center for Cultural Studies & Analysis, a Philadelphia think tank. “If you give people something, even something small, then they feel obliged to you,” he said. “Reciprocity is an absolute in pretty much every culture.” 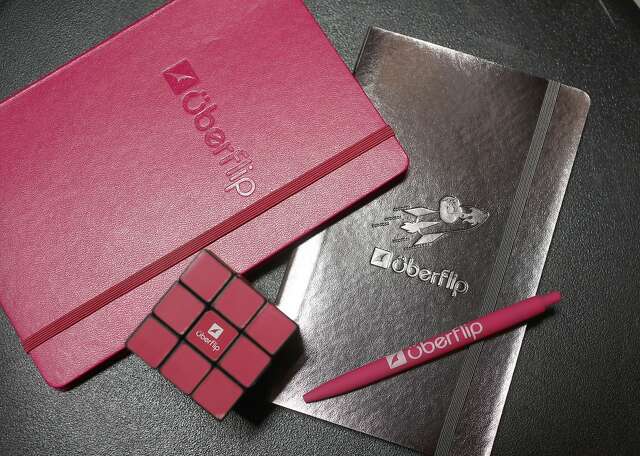 Museums in Silicon Valley are already collecting promotional items like T-shirts from companies; the ephemeral items provide a record of a fast-changing industry. Photo: Liz Hafalia / The Chronicle

In addition, swag works when it lingers in your personal space. “People see thousands of advertising impressions — on billboards, websites, TV and radio every day and rarely remember them, but almost everyone remembers brands represented by products that sit on their desk, in their kitchen, that they wear to work or sports games,” said Andrews from the promotional industry trade group.

“We’re all just big dumb crazy squirrels who instinctively collect things even if there’s no purpose to them,” Saffo said. “Future archaeologists will someday thank us for the sedimentary layer of swag of Silicon Valley.”